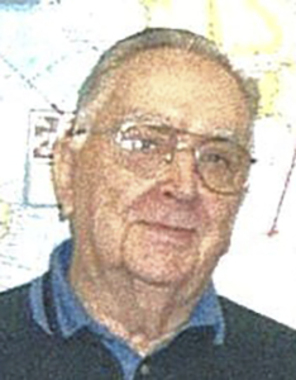 Back to Alexander's story

Dover-Foxcroft - Alexander C. Powell Jr., ninety-three years of age, passed away on February 5th at Northern Light Eastern Maine Medical Center. Alex was born December 12, 1926, in Bangor, to Alexander and Francis (Sutton) Powell. He was raised in Bangor and attended Bangor schools graduating from Bangor High School in 1944.
Alex Powell was a member of our country's Greatest Generation. Upon graduation from Bangor High School, Alex enlisted into the Army/Air Force. He attended flight school in Biloxi, Mississippi. For the remainder of World War II, Alex proudly served his country as a B-25 bomber flight engineer.
After serving his country, Alex returned to Maine, a state he truly loved, and began years of gainful employment with New England Telephone and Telegraph Company. Alex spent thirty-eight years working for the phone company placing telephone systems across the great state of Maine. After retiring from the phone company, Alex, always a man of strong aptitude and work ethic, self-taught himself architectural design, which he dearly loved. For the remainder of his wonderful life, Alex functioned as an architectural designer. Alex also enjoyed gardening, skiing at Sugarloaf, and all sports, especially baseball and football. Alex always rooted for the Boston Red Sox and New York Giants. He very much enjoyed all University of Maine teams.
In 1947, Alex married Donna Bridges. Donna preceded Alex in death, passing away in February 2009. In 2010, Alex met and married Mrs. Sandra Hughes of Dover-Foxcroft. Alex and Sandra were deeply in love and blessed with nine beautiful years together.
Alex is survived by his beloved wife Sandra; his son, Dane Powell and wife, Doris, of Cocoa Beach, Florida; his daughter Alexis Cunningham and husband, Philip, of Dayton, Ohio; three step-children, Eileen Herring and husband, Jim, Scott Hughes and wife, Karen, and Brenda Walker and husband, Doug; grandchildren, Peter Yuastella, Chris Yuastella, Vincent Yuastella, Robert Yuastella, Dane "Chip" Powell, and Heidi Powell; step-grandchildren, Jamie Bray, Kyle Bray, Sarah Bray; and several great grandchildren.
Memorial services will be held 1PM Saturday, February 15, at the United Baptist Church, Dover-Foxcroft. A graveside celebration of life will be planned this summer at the family lot in Rural Grove Cemetery, Dover-Foxcroft. In lieu of flowers, memorial contributions may be made to the United Baptist Church, 146 East Main St. Dover-Foxcroft, ME 04426. Arrangements are in the care of the Lary Funeral Home. Messages of condolence and memories may be expressed at www.laryfuneralhome.com.
Published on February 10, 2020
To send flowers to the family of Alexander C. Powell, Jr., please visit Tribute Store.

Send flowers
in memory of Alexander

A place to share condolences and memories.
The guestbook expires on May 10, 2020.