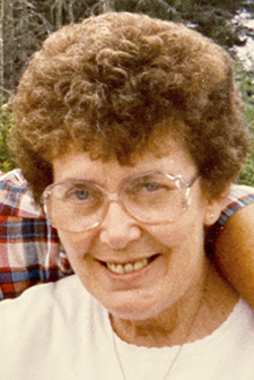 Back to Charlene's story

Dexter - Charlene Marilyn "Kitty" Breton, 89, passed away Sunday evening, Jan. 5, 2020 at Dexter Health Care. Kitty was born on March 12, 1930, in Dexter. She was the last surviving child of seven children to parents Maurice Carr (1892-1968) and Jessie (Page) Carr (1902-1991). She attended elementary school at Carr's Corner District and graduated from N.H. Fay High School in Dexter in 1948. Kitty was married to Norman "Mike" Breton (1928-2018) Sept. 16, 1950. They were married for 68 years, residing primarily at their home on Gould Ave in Dexter where they had four children. She worked as a secretary in offices around Dexter, including Dexter Shoe and Abbott Woolen Mill.
In her early years Kitty enjoyed family holidays and picnics, snowmobiling with family, loved to go on boat rides, playing cards, line dancing and going on walks with Mike. In her later years, she enjoyed family outings and holidays at camp in Ripley. Her banana, zucchini, and apple breads, fruit salad, graham cracker pie and strawberry rhubarb cake were legendary at family gatherings.
Kitty is survived by her son, David Breton and his wife, Cheryl of Dover-Foxcroft; and daughter, Gail Hynds and her husband, Robert of Hampden; her grandchildren: Derek Breton and wife, Charlotte, of Madison, AL and their daughters, Jordan, Gabriela and Amelia; Marjorie (Hynds) Besaw and husband, Ian, of Portland, OR and their daughters, Vivian and Olivia; Tricia (Hynds) Jellison and husband, Chris, of Hampden and their children, Lily and Mason; Brian Breton and wife, Alyssa, of Dexter and their children, Hailee and Domenick; Sherri (Hynds) Crossman and husband, Ben, of Hampden and their sons, Eli and Ethan; Jessi Breton and her fiancé, Cody Coiley, of Dover-Foxcroft; Alex Hynds of Hampden; her sisters-in-law, Marion Carr of Dexter, Joyce Carr of Corinna and Marie Carr of Sidney.
Charlene is predeceased by her husband; parents; sons, Robert Breton (1962-1962) and Alan Breton (1964-1964); her brothers, Albert Carr (1918-1919), Lewis Carr (1921-1974), Merle Carr (1924-2002), Clayton Carr (1928-2011), Dennis Carr (1935-2006); and her sister Helen (Carr) Newbert-Lacasse (1926-2012).
Services will be held at Hampden Highlands United Methodist Church, 44 Kennebec Rd, Hampden, ME 04444 at 3pm on Sunday, January 26. Interment and graveside service will be in the spring at Mt Pleasant Cemetery in Dexter. Arrangements are in the care of the Lary Funeral Home. Condolences and memories may be expressed at www.laryfuneralhome.com.
Published on January 10, 2020
To send flowers to the family of Charlene Marilyn "Kitty" Breton, please visit Tribute Store. Send flowers
in memory of Charlene