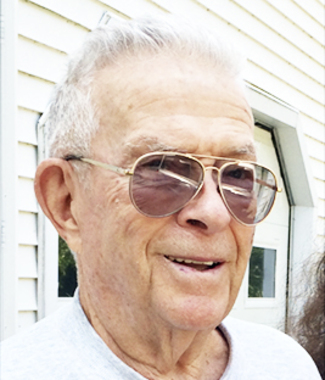 Back to Donald's story

Sebec - Donald Arthur Ambler, 90, passed away peacefully at Hibbard's Nursing Home in Dover-Foxcroft, on November 30, 2019, after a period of declining health.
He was born in Highland Park, NJ, March 2, 1929, the son of Walter A. Ambler and Lillian (Wade) Ambler. Don was educated at Hamilton School, Highland Park High School, Rutgers Prep, and New Brunswick Senior High School, graduating in 1947.
He and Jane H. Waldron were married September 8, 1951, at the College Avenue Reformed Church in New Brunswick, NJ. Their honeymoon was spent at the Ambler camp in Bowerbank. They first had an apartment in New Britain, CT, while Don was employed with Stanley Electric Tools. Then back to New Brunswick area and a home in Piscataway, NJ. Don served as bank teller at the First National Bank of Highland Park, NJ, for 10 years. Vacations were spent at Sebec Lake, as well as many long weekends. Their daughters Jenifer and Brenda were born in 1961 & 1963.
January 1964 brought a move to Dover-Foxcroft, year round for Don to work at the Piscataquis Savings Bank, first in an apartment on Lincoln Street, then a Victorian house on Winter Street in Dover-Foxcroft, then building a house in Sebec in 1973 when the girls became interested in horses and Don became less interested in maintaining an old house. He stayed with the bank as it became Bangor Savings Bank, retired as a Vice President and continued to be on the Board of Incorporators. He was active in Kiwanis for many years, was a founding board member of the Bangor Ronald McDonald House, and a 35+ year member of the Blue Knights Law Enforcement Motorcycle Club. In retirement, Don and Jane traveled all over the US, first with a truck camper and then an Airstream trailer, attending Blue Knights conventions and visiting family and friends. He enjoyed helping people and was involved in Sebec town business for many years including the Fire Department Board, Sebec Corner Cemetery Board, and Historical Society. Don crisscrossed New England transporting vehicles for Rowell's Garage, and loved spending time on his tractor, mowing grass and clearing snow.
Survivors are his daughter, Jenifer W. Ambler; granddaughter, Katherine Anne "Kate" Maisner of Guilford, VT; sister in law, Roberta Ambler of Monroe Township NJ; two nieces, Barbara A. Killinger and husband, Glenn, of Simpsonville, SC, and Nancy A. Walter and husband, Arthur, of South Plainfield, NJ; nephew, David C. Ambler and wife, Lola, of Barcelona, Spain; and an honorary son, Dan Cole of Dunedin, FL. In addition to his wife, Jane, Don was predeceased by his parents; daughter, Brenda W. Ambler; brother, Walter W. Ambler; and son-in-law, Thomas P. Maisner.
Visiting hours will be Saturday, December 28, 2 to 4 pm at the Lary Funeral Home in Dover-Foxcroft. A private family gathering will take place in the spring. Burial will be private in the family plot at Sebec Corner Cemetery. Donations in his memory may be made to the Ronald McDonald House Charities of Maine, 250 Brackett St. Portland, ME 04102. Messages of condolence and memories may be expressed at www.laryfuneralhome.com.
Published on December 4, 2019
To plant a tree in memory of Donald A. Ambler, please visit Tribute Store.

Plant a tree in memory
of Donald

A place to share condolences and memories.
The guestbook expires on March 03, 2020.