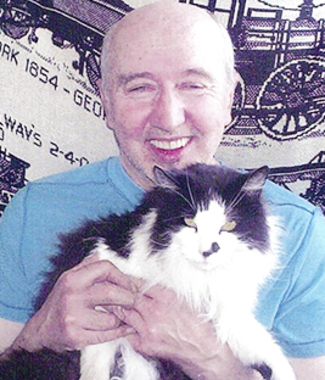 Back to George's story

Saco, Exeter, Dover-Foxcroft and Lincoln - George Leon Knight, 73, passed away peacefully January 27, 2020, at Northern Light Eastern Maine Medical Center. He was born December 30, 1947, in Biddeford, the son of Linwood A. and Dorothy "Pauline" (Lester) Knight. George was raised in Saco and attended Saco schools before moving to Exeter to be closer to his sisters. He lived in Exeter for 10 years before spending short stays in Dover-Foxcroft and Dexter, and he then settled in Lincoln. A man of faith, George was a member of the Saco United Methodist Church and the First Congregational Church of Lincoln, where he had many special friends. He enjoyed spending time with his family, attending church, music, the outdoors, and clam bakes on the beach.
George is survived by his two sisters, Jean Anne Knight of Dexter, and Janet Louise Bailey and her partner, John Gornall, of Garland, and John's children, Daran of Kennebunk and Kerry of Seattle, WA; extended family members, Barry Ladd of Meredith, NH, and Bruce and Kenneth Ladd, both of Kennebunk. He was predeceased by his parents, and an extended family member, Priscilla Ladd Knight.
A memorial service will be held 1PM Sunday, February 23, 2020, at the First Congregational Church of Lincoln, with Rev. Sue Burgess officiating. Burial will be in the Pine Grove Cemetery, Dover-Foxcroft, in the spring. Arrangements are in the care of the Lary Funeral Home. Messages of condolence and memories may be expressed at www.laryfuneralhome.com.
Published on February 3, 2020
To send flowers to the family of George Leon Knight, please visit Tribute Store.

Send flowers
in memory of George

A place to share condolences and memories.
The guestbook expires on April 30, 2020.